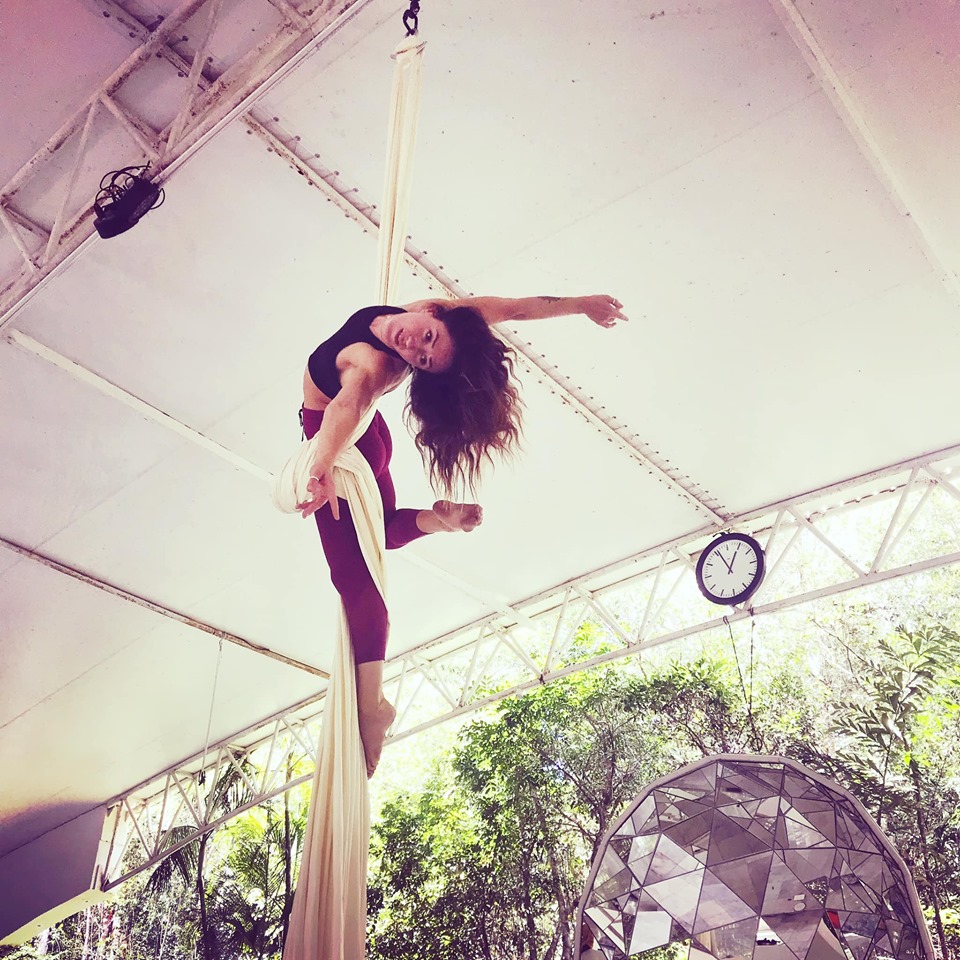 Sarah is from a small town in Northern California called Coloma known for whitewater and Gold Rush tourism. She also considers Lake Tahoe her home where she received her B.A. in Pyschology, fascinated with the inter-workings of the human mind and soul. Her aerial journey started when  she saw a mesmerizing aerial silks performance at her first Burning Man Festival in 2013 and knew she had to start training ASAP. Coming from an adrenaline seeking and athletic background of snowboarding, hiking, and rock climbing, she instantly knew she found her calling and a way to apply her natural strength. She began a highly disciplined practice in Sacramento, CA., while working a job in mental health. After an extended trip to backpack and rock climb in South East Asia, she knew a tropical climate would allow her to thrive, and decided to move to the the closest place to paradise without a passport- The Big Island of Hawaii.

Soon after relocating, she began training intensely, teaching, and performing and her thirst for more aerial knowledge and skill only increased. She has since completed two teacher certifications in aerial silks in 2017 (beginner and intermediate) under Born to Fly, one of which took place in Bologna, Italy! She plans to complete her advanced certificate as soon as they offer it. She stresses safety first, aware of the inherent danger easily overlooked in the graceful nature of aerial dance. As an active naturalist; she avoids the gym, but enjoys the rush of playing, climbing, dropping & twirling high in the air. She has performed professionally for two years for shows, parties, festivals, and corporate events.

Currently she is a part of Awol’s professional training program, FlyCo, and will complete it over summer. In her normal life, she is busy building her retreat business and hosts many specialized retreats around the world ranging from yoga, aerial, outdoor adventure, & therapeutic healing. She enjoys the transformative environment that she can offer through her retreats- to work with people of all ages & backgrounds at a deeper level.

She is afraid of caterpillars and earthworms but would love to have a pet spider one day.